I've been tagged in this 10 Things thing going around the blogosphere by the lovely and intriguing Melodie Wright at Forever Rewrighting. My understanding is that I should share 10 tidbits about myself and then nominate a few fellow bloggers to do the same. So here goes: 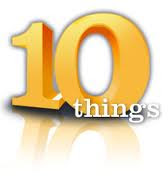 1. The day my daughter was born was the greatest day of my life. Sometimes when I am having a bad day or I am particularly stressed, I think about that day and it cheers me up.

2. The titles of my crappy young adult novels that I wrote between the ages of 11 and 18 were "Black Summer", "Teach Me To Laugh", "Love, Ice Cream and Pucks" and "From Reneau, With Love".

3. I went 3 years with no freezer in my early 20s. It was terrible. You don't realize how much you use your freezer until you don't have one.

4. I went 7 years without television programming in my 20s as well. I had a television but lived in a rural area where you couldn't get any channels without cable and I couldn't afford cable so the only thing I could ever watch on my television were movies I rented. I was so happy when they started putting out complete seasons of television shows so that I could catch up to what everyone else I knew was watching. I would housesit for people and binge on television.

5. Once I started watching complete seasons of shows on DVD, my favorites were Friends, LOST, Alias, The OC (the first 2 seasons) and Grey's Anatomy. Before the no-TV time, I loved Ally McBeal. Since I returned to the television-watching world, I also watch Private Practice and American Idol. Oh and Parenthood which I love because there's no real, over-the-top drama, only stuff that actually goes on in the daily lives of parents.

6. I hate football. Hate it. Even the sound of it playing on the television makes me want to crawl into bed and never come out. I have no idea why. It just depresses the heck out of me. Therefore, I do not celebrate the Stupid Bowl, uh, I mean Super Bowl.

7. I'm completely obsessed with the Philadelphia Phillies. During the season they are on every single night in my household. I want to have my wedding at Citizens Bank Park.

9. My most favorite book as a young child was Grover's The Monster at the End of This Book. I made the adults in my life read it to me over and over and over again. {SPOILER ALERT} Even though I knew after the first time that Grover was the monster at the end of the book, that book still scared the crap out of me every single time I read it.

10. I love fishing but I don't like putting the worm on the hook. It grosses me out. Go figure.

I am going to tag a few talented and interesting bloggers whose blogs I am relatively new to so that I can learn more about them, so with that criteria in mind, here goes:

JeffO at The Doubting Writer

Heidi Windmiller at . . . then she writes

Brenda Sills at The Startled Spyglass

Julie Flanders at What Else is Possible

And now for the Contest Reminder!

I'm having a series of Hook for Your Book Contests in the next several months. They will run as follows:

Each contest will be judged by my agent, Jeanie Pantelakis of the Sullivan Maxx Literary Agency.

The rules and such can be found here. Basically you will enter a 50 word pitch for your completed novel in the comments section of my blog. Jeanie will read the winner's full manuscript and if she loves it and wants to represent it, the winner could also get a contract with Sullivan Maxx. This is a great opportunity for unagented writers in these genres so please spread the word!
Labels: background blogging Contest random