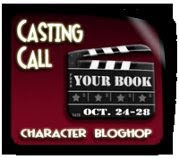 As you may or may not know, Carrie Butler of So You're a Writer and Melodie Wright of Forever Rewrighting (and me, sort of) are hosting a Casting Call Bloghop this week: 10/24/11 through 10/28/11.

So here's the deal:

2. Create a blog post introducing us to some of your characters (use photos, drawings, blurbs, excerpts, book trailers--whatever strikes your fancy--but be creative!)

3. Hop around to other peoples' casting calls and meet some new characters!

We are going to pick a winner at random at the end of the bloghop and that person will get one three chapter critique from all three of us.

Please note: I am not techno-savvy nor am I an artist. My four year old kicks my ass in drawing stick figures so instead of sketches or drawings I've chosen the actors I think would be best suited to play my characters if a movie were ever made of my book.

Meet Claire Fletcher. When she was fifteen years old she was abducted by a psychopath who held her captive for ten years. In the early years her abductor used physical force to keep her but over time, the chains that bound her to him became largely pscyhological. It doesn't help that every time she thinks of leaving or sneaks out to try to make contact with someone in the outside world, he threatens her family.

If I had to choose an actress to play Claire Fletcher in the movie I'd choose either Evangeline Lilly or Michelle Monaghan. Both sort of look like the way I imagine her in my head and both have a sort of vulnerability about them that I think would be perfect for Claire.

(Lilly's photo is from her Wikpedia page and Monaghan's is from the following site: http://www.michelle-monaghan.celebscentral.net)

Meet Connor Parks. He's a newly divorced Sacramento Police Detective who just botched a major arrest by shooting (and killing) a rape suspect. (He thought the suspect was firing at him.) He goes to a bar and meets a mysterious woman who says her name is Claire Fletcher. They spend the night in each other's arms (no hanky-panky) but Claire leaves before Connor wakes up. When he goes to the address she leaves for him, he meets her family and they tell him that Claire Fletcher was abducted ten years ago and she is presumed dead. Connor believes the woman he met is the real Claire Fletcher so with the help of private investigator, Mitch Farrell, Connor reopens Claire's case and sets about finding her once and for all!

If I had to pick an actor to play Connor in the movie, it would be either Chris Pine or Ryan Gosling. Again, neither one looks exactly as I picture Connor but there is a quality about them that makes me think of him.

(I got Pine's photo from his Wikpedia page and Gosling's photo from this website/article: http://quotes.whyfame.com/ryan-gosling-did-not-corrupt-britney-spears-or-christina-aguilera-718)

Although I realize this post is quite long, I'm going to post an excerpt from the book--a scene between Connor and Claire. You can stick around and read it or move on. It's up to you! For reference, Boggs and Stryker are Connor's co-workers and Mitch Farrell is the PI Connor is working with on Claire's cold case.