Thanks to everyone who stopped by for the I'm Thankful for my Readers bloghop!  I'm thankful that you all stopped by and that you continue to stop by.  So I promised today I'd reveal the cover for my second novel, Aberration, which is due for release from Sapphire Star Publishing on June 6, 2013. 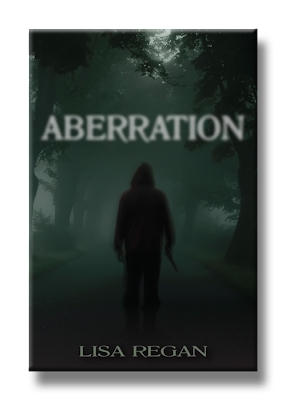 Okay, so I know that if you put it next to the cover for Finding Claire Fletcher, it almost looks like the same cover.  (But look closer, this dude in the hoodie has a knife!)  But in all seriousness, when people think of my work I want them to think:  dark, creepy, haunting.  I think this accomplishes that!  I'm okay with the similarity.  One of my family members said to me, all scrunchy-faced, "I hate to tell you this but it looks the same as your last cover," like they were giving me bad news.  It's all right. That was the idea.

Here is the synopsis to go with it:

FBI analyst Kassidy Bishop is assigned to the “For You” killer’s task force after a series of sadistic murders bearing the same signature arise in different parts of the country.

The homicides are both calculated and savage, occurring in different states, but bearing the same signature: the words “for you” scribbled at each crime scene. The case chills Kassidy, bringing back memories of her own encounter with a violent criminal five years earlier.

Kassidy’s mentor, legendary agent Talia “The Confessor” Crossen knows the task force assignment is Kassidy’s chance to prove to her colleagues that she belongs in the Behavior Analysis Unit. For five years, other FBI agents and profilers scoffed at Kassidy’s appointment to the BAU, believing she was only offered the position in exchange for her silence about the brutal assault that almost killed her.

The stakes rise when the task force links the killer’s signature to Kassidy. As more and more bodies turn up, Kassidy must delve into her past and the mysterious death of her twin sister, which holds the key to uncovering the killer’s identity.

The closer Kassidy comes to finding the killer, the closer she comes to a deadly confrontation that could cost her everything—including her own life.

That's it!  Have a great weekend, everybody and thanks for stopping by!  Come again on 11/12/12 to meet author of Sugar's Dance and Sugar's Song, Katie Mettner.  Also, on 11/16/12 I'll be revealing the trailer for Finding Claire Fletcher.