My daughter said to me, "Why are we calling it a launch?  That's something only rocket ships do!"

I don't know, but that's what we called it: "The Launch".  It was mine and my mom's idea to have some kind of party to mark the occasion of me fulfilling my lifelong dream.  So we set about planning a Launch/Release party.  We ended up having it at the neighborhood Applebee's because, well, Philadelphia doesn't have a lot of love for its debut authors.  I grew up in the Roxborough/Manayunk section of Philadelphia.  After college, I moved back here.  Both sides of my family are from here--many still live here.  My husband is from this neighborhood.  I met him across the street from where we live now!  I wanted to keep the celebration of the release of my first novel in my neighborhood.  Many people seemed to balk at this idea, and I'm not sure why.  I was getting turned down by pretty much every place I approached.  Then my mom realized that our local Applebee's had a banquet room of sorts, and she approached them.  They were crazy enthusiastic and because of that, I couldn't wait to book with them!  And having had the launch there, I'm so happy and relieved that that's where we did it!  So the date, time and location were set.  Invites went out. Books were reserved.  Butterflies were all aflutter!

My fake Aunt Ava even surprised me by having a gorgeous giant, poster-sized cover image of Finding Claire Fletcher created for me and honestly, if I thought I could do it without crinkling or ruining it, I would be sleeping with this bad boy!  What a lovely and incredible gift!  My daughter made us all pose with photos next to it but I'll spare you . . . 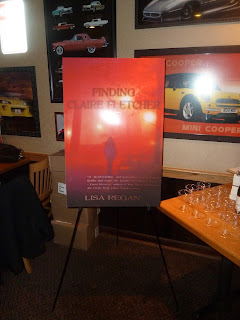 I went to work.

That's right.  I went to work. Cause let's face it, writing doesn't pay and my job has awesome benefits.  I worked an almost full day, during which time I thought my phone was actually going to crap out because of all the social media messages I received.  It was quite awesome.  Let's just say I was really feeling the love!

Then I picked up my daughter from school, we went home and got changed, the hubs loaded the car with all of our launch materials and we were off!  And I was actually late for my own signing cause Regans are like that.  Lucky for me, only my cousin Mark had shown up ahead of me, and because he's such a wonderful guy, he wasn't at all annoyed and even helped us transport all our launch stuff into the building.  So we set up. 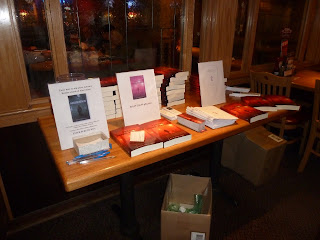 If you look to the far right there, you'll see my daughter's book.  Yes, my daughter's book.  She's five and the world is so exciting for her, and I wanted this to be exciting for her too.  So a couple of months before the big launch I sat down with her and talked to her about what it would be like and we decided she would create her own book.  And she did.  She drew all the pictures and told me what to write in terms of the narrative.  She wrote her own name on the front of it.  We even did an About The Author at the end and I got to blurb her book.  It was quite creative and had a story arc and everything.  I got 60 of them printed up at Staples.  And, as she loves to tell people now, "I sold out all my books before Mommy did!" 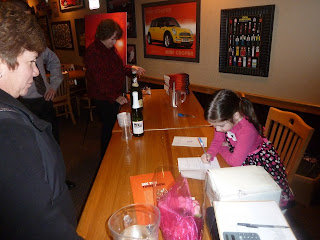 There she is signing her very first book for one of her lovely teachers who came out to the launch to support her!

She had a blast and so did I!  I was amazed by how many people came out to support me in this endeavor.  The first hour or two was easy. There was a steady flow of people and I had time to work the room and chat.  Then all of a sudden there was a line out the door--yeah, a line out the door for little old me and my little old book that for six years was "great but not quite there"--I'm still pretty stunned!  People I haven't seen in months and years drove from other states to come and buy a book, have it signed and hang out.  A college friend I hadn't seen in a decade.  Friends I went to grade school with who I hadn't seen in years.  A former karate student from upstate who is all grown up now and going to college in Philadelphia.  One of my college professors and his wife.  Relatives, friends, neighbors.  Even the wonderful ladies I met at Bouchercon came!  Like I said, I was really feeling the love!  Pretty amazing stuff.

I signed and signed and signed and tried to talk to everyone who came and get my picture taken with them.  I didn't eat or pee for 6 hours and it was incredibly awesome.  Still when I think about it, I'm so humbled by the support I received on this night! If I calculated correctly, 155 copies of Finding Claire Fletcher went home with readers!  I actually ran out.  Most of these people were family and friends or friends of friends, but a good deal were people I didn't even know.  So many people brought people which was incredible. In fact, a woman having dinner at Applebee's popped in and asked me if I was Gillian Flynn (who is one of my idols).  Somehow, I managed not to blurt out, "I WISH!" and instead sent her off with a bookmark and the promise that my book would only cost her $3.99 on her nook!

I have to give a shout-out to Ian, who was our server.  He was brilliant.  I don't know how he pulled it off with so many people there, but he did an incredible job.  In fact, he was so good that for three weeks after the launch I actually had people come up to me and tell me how great he was during the event!  So Ian, thank you.  You're incredible.  Applebee's:  Promote this man and give him a huge raise.  He pretty much single-handedly made the night a success, and that part where he could read my mind and set things up exactly how I wanted without me even having to say anything was pretty cool too.  Oh and he kept bringing me food even though I didn't have time to eat it.  Holy multi-tasking genius.

We got home around 11 p.m. exhausted and completely exhilarated--happy beyond words.  We ate the meal that Ian so lovingly sent home with us--realizing that I had not actually eaten the whole time--and marveled over all the people who came out to launch Finding Claire Fletcher into the world!

Stay tuned for more Post-Release Posts!  I haven't even talked about what happens when people actually READ your book!