To recap this week-long series on Surviving Query Hell, my previous "tips" were as follows:
1.  Have a Really Good Book
2.  Get a Life
3.  Keep Copies of the Close Calls
4.  Have a Support System
5.  Keep Writing
6.  Remember the Time Difference
7.  Follow Up but Don't Be a Stalker
8.  Re-evaluate
9.  Don't.Take.It.Personally 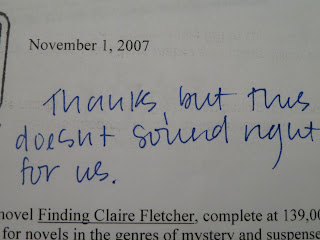 10.  Do Your Research.  This should probably be number 2.  Make sure you're doing it right.  Do you have the right addresses or email addresses?  Have you visited the agent's website or blog and checked their submission guidelines?  Are they accepting queries?  Are they accepting them in your genre?  In what format?  Email, snail mail?  Do they ask you to send the first five pages?  Pasted into the email or as an attachment?  What are they looking for?  What kinds of books have they sold in the last year?  Are they comparable to yours?  YOU MUST FIND THE SUBMISSION GUIDELINES AND FOLLOW THEM.  You don't want your query getting deleted unread because you didn't follow directions!

11.  Keep up with Current Events.  Agents move around, start their own agencies.  Interns and assistants are promoted.  You want to know who's who and where they currently work.  For example, maybe you wanted to query Agent A and Agent B but they both work at the same agency.  Almost every agency has that only-query-one-agent rule.  Which means you can't query both of them at the same time.  You can probably query one of them, wait a respectable amount of time after the rejection (I waited a year but six months may be reasonable as well) and then query the other one but that could take a long time.  If you find out Agent B has started her own agency, then you can query her immediately!  For me, I found the best way to keep up with what's going on in the industry is to subscribe to Publisher's Marketplace.  There is a small monthly fee.  But there are many other free sites out there from which to glean information, including agency websites themselves and agent blogs. 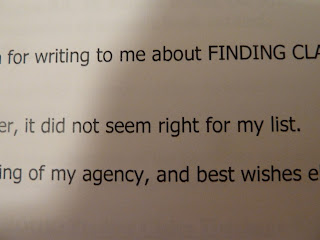 12. Ask For A Referral.  If an agent really loves your book but passes anyway, ask them for a referral to another agent.  The worst thing that can happen is that they ignore your request or just say no.  I'm not talking about an agent who read a partial and politely declined.  I'm talking about an agent who makes it clear to you that it was a very close call.  In other words, you can't ask every agent who rejects you for a referral but if an agent has spent some time reviewing your work and expresses a great deal of enthusiasm and then a great deal of regret on passing, ask them for a referral.  I did this with three agents who had spent a long, long time with my books.  Agents who made it crystal clear to me that they loved my work but had to pass for whatever reason.  There were agents who read my work within a few months and simply said something like sorry it's not for me or I wasn't drawn in enough--things like that.  I obviously didn't ask those agents for referrals.  It's a bit of a fine line but if you do happen upon an agent who seemed very close to offering you a contract and they ultimately declined, I don't think you have anything to lose by asking for a referral.

13.  Read Rejection Stories. Really.  They'll make you feel better.  There is this story floating around about Jerzy Kosinski, a best-selling author in the late 60s and 70s, that he took one of his best-sellers and submitted it to several agents and publishing houses under a different name.  The story goes that it was rejected by over a dozen agents and a dozen publishers, including the publisher that had actually published it!  I can so see this happening by the way.  These stories are all over the place.  Just google publishing rejections or some variation thereof and you'll find lots of stuff.  The Chicken Soup for the Soul books were rejected over and over again.  John Grisham had limited success with his first novel, A Time to Kill (which is ridiculously awesome by the way).  Kathryn Stockett of The Help fame was rejected by 60 some agents before she found someone to champion her book.  This is not to say that if you wait long enough and get rejected enough, you'll go on to become a best-selling sensation.  I'm just suggesting that reading about other people who made it against incredible odds will give you hope.


But Lisa, you say, I've done ALL of these things.  Repeatedly.  Nothing is happening!  What do I do now?


KEEP GOING.  KEEP TRYING.  DON'T TAKE NO FOR AN ANSWER.


What kind of flipping idiot still thinks they can still get an agent after two books and nearly five years of trying?
This one, that's who.